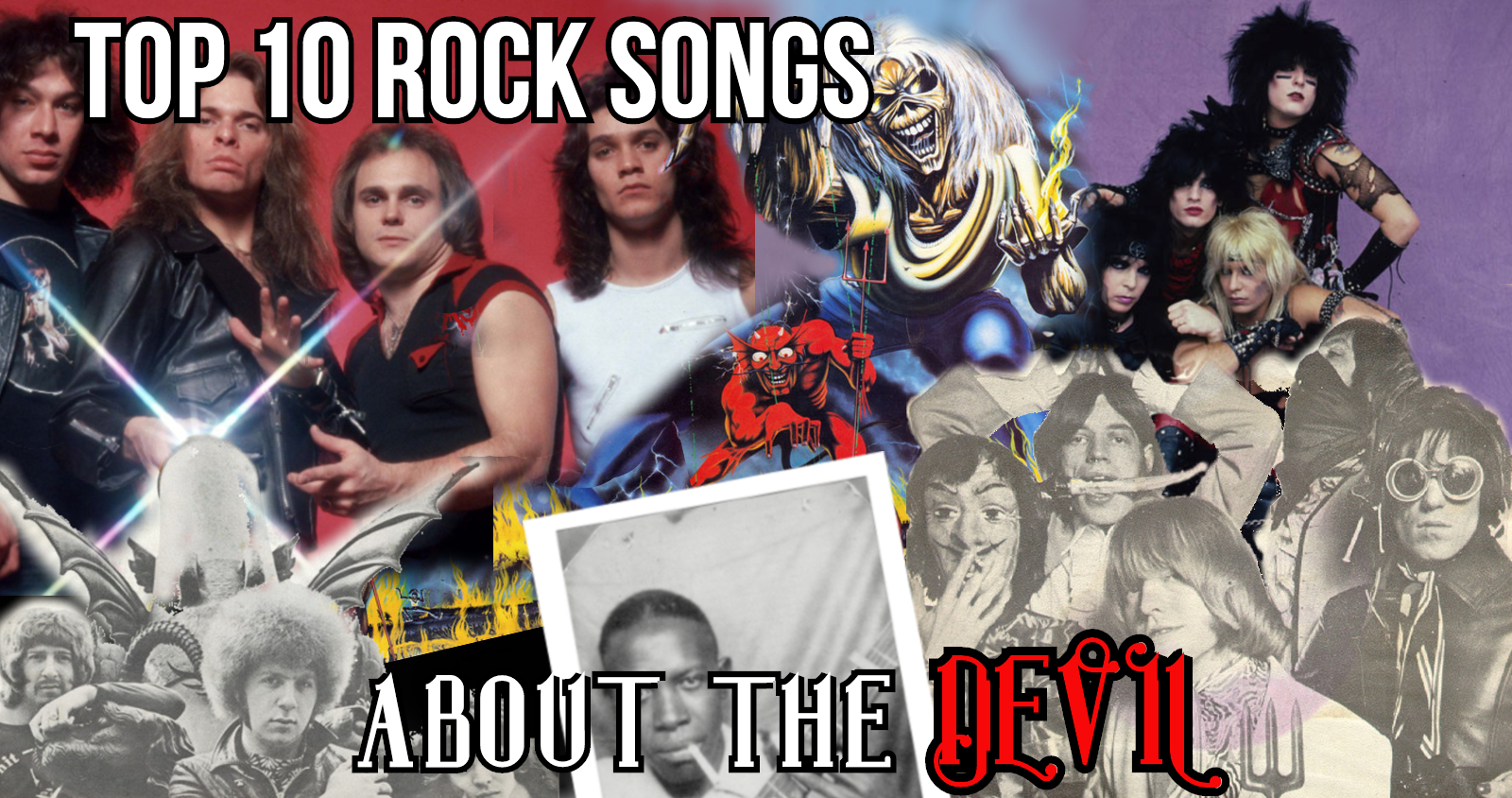 Since it’s Devil’s night, Oct 30th, and just before Halloween, cottagemixtape.com is going to take a look at the Top 10 Rock Songs About The Devil.

Rock and Roll and the concept of the “devil” have been intertwined since rock and roll’s inception, beginning with the story of Robert Johnson meeting the devil at the crossroads, set as the corner stone of rock. The story goes that in order to become famous in rock and roll, you have to sell your soul to the original bad man. Furthermore, Rock and Roll would be labelled by conservatives as “the Devil’s Music” from the onset and this sentiment would be repeated throughout different eras. Whether it was Rock and Roll in 50s or later with Heavy Metal in the 70s ad 80s. So, it’s not entirely supernatural that the devil himself would also be the subject of many rock and roll songs themselves.

…Let’s take a look at the Top 10 Songs About The Devil In Rock and Roll!

Starting it off right, we go straight to the source. Robert Johnson’s “Preachin’ Blues (Up Jumped The Devil” from 1939. In the blues world, having the blues (it’s most popular subject) is many ways synonymous with the devil. In fact, the devil and the blues are almost interchangeable: causing depression, ruining your home or causing you to act out. The blues, as well as the devil himself, can perpetrate these things. Just like this song, “Preachin Blues”, where the blues walks up to your house and accosts you like the devil passing through and makes you ill. Needless to say the only way to get rid of the blues is to sing the blues, which leads to self expression, which ultimately leads to Rock and Roll.

Before Van Halen was “Running With The Devil”, the Gun had an international hit with “Race With Devil”. A heavy, blues based, proto-metal song with maniacal laughter and, of course, “the devil” as its subject. The song has been covered many times, including a cover by Judas Priest. I actually played both versions back to back on Cottage Country Vol. 9. The fact that later there was a RV-horror movie made, starring Peter Fonda also called “Race With The Devil” (1975) is not lost on us here at cottagemixtape.com (should definitely review that).

Next, here is a rare cut from obscure Canadian band, Mill Supply with a more sobering, melancholic take on the Devil. Like The Band meets Aleister Crowley, the lines “Everybody be what you want to be”, almost echoes Crowley’s mantra of “do what that wilt”. This song was featured in Jello Biafra’s Incredibly Strange Music and, like the devil himself, this record has reached mythical status. Now, this record fetches over $100 dollars amongst collectors. Tempting but pricey. Get back, devil!

Here are The Rattles with their 1971 hit, “Devil’s On The Loose“. Now, the band scored their biggest hit, previously with “The Witch” (1968), so the band was not opposed to supernatural subjects, here going one further with the devil himself. “Devil’s On The Loose” is such a banger with a very European Go-Go feel, but it is just such a heavy slab of pop fun. The Devil would approve.

Number 6 (..66) on our countdown (and we didn’t even plan that, swear to Eddie), Iron Maiden’s “Number Of The Beast”. This one is on everyone’s Devil / Halloween list, and rightly so. It is probably the first song that comes into people’s minds when they think about “the devil” in rock songs. Always controversial and always ‘killer’ with a flare for the dramatic and the demonic, Iron Maiden released this as their first single from the 1982 album, also titled, “Number Of the Beast”. Supposedly, the song was inspired by a nightmare by Bill Harris had from watching Damien: Omen II (1978).

This song bangs, right?! Linn drum machines, stabby guitars like the devil poking you with one of those pitchforks. We are talking about INXS’ “Devil Inside” from their album, Kick (1986). This song was a mega hit when it dropped, people went bonkers. It was slightly unusual and controversial for a band like INXS, in that people had them pegged as this Australian pop/new wave act and then here they come with this hedonistic LA club jam that even rockers could appreciate. Furthermore, you can’t help but think that the “Devil Inside” is somewhat autobiographical for Michael Hutchison. For the most part, a pretty shy guy who wanted to be famous on a world stage who had to “bring the devil out” as it were. To accomplish that he had to break his shyness and become a charismatic and enigmatic singer of a world renowned band. It was this song that really made them crossover (I think) from new wave to a broader rock audience. Adding an element of danger and raw sexuality to it that pushed him into the spotlight. So, maybe you don’t have to sell your soul, just write a song about the devil to achieve it.

Next, we come to 80s rockers, The Cult with “Lil’ Devil”. The Cult were by no means a sinister band, even though their original name was Southern Death Cult. They began as a goth rock band but pushed their way to a harder, more classic rock sound (this song being produced by the legendary Rick Rubin). So their was always the dark clothes and imagery but they were never really considered to be a Satanic band. If anything Ian Astbury was more enthralled with the world of Native American spirituality, stemming from his time spent in Hamilton, Ontario. The Cult were mostly just a bit of fun and “Lil’ Devil” is a prime example of that, “Come on lil’ devil, be my lil angel“. “Shacks” and “one-horse towns” obviously bring to mind allusions, the original bad boy Jim Morrison from the Doors.

The Cult’s “Lil’ Devil” appears on Cottage Country Vol. 4, be a little angel and put it on.

I live my life like there’s no tomorrow
And all I’ve got, I had to steal
Least I don’t need to beg or borrow

These are opening lines from Van Halen’s “Running With The Devil”, a song that opens as their first song on their first album and, as such, it reads like a manifesto for the band, Van Halen. Followed by the lines (“…ain’t got nobody waiting at home”) which really have a bluesy feel to them. Which really brings the whole thing back to Robert Johnson and rock’s early blues connection to the devil as a subject. It’s not any sort of dogged worship but an understanding that evil exists and that even a “righteous” man walks the line with evil everyday (if you believe in that stuff). So there is no real connection to the devil or demonic imagery, just a metaphor of the temptations of road life, that of which Van Halen have filled many a book.

Listen To Van Halen’s “Running With The Devil” on Cottage Country Mix Vol. 3:

Taking a big cue from Van Halen, we have Mötley Crüe’s “Shout At The Devil”. Both songs have a very similar tempo and feel (especially in the intro with that one note bass line) and a similar subject, The Devil. Now, both bands came from very similar backgrounds as the bad boys of the L.A. glam rock scene both from their perspective times. For both bands, the use of the devil as a subject was really meant to perpetuate this rock and roll lifestyle. However, Mötley Crüe went a step further with a more metal look and darker imagery. For Mötley Crüe they wanted to offend and scare parents. It was 1983, and in some way world’s away from 1978’s Running.

Satan worshippers? Probably not, Crüe and particularly, Nikki Sixx gravitated to the dark imagery and saw it as a means to shock and terrify parents, and conversely, thrill kids. Hence the inclusion of the pentagram on everything: the Shout At The Devil original album cover and inner sleeve; on Tommy Lee’s drum kit for the “Looks That Kill” video that flies off onto the witch’s shield; also the burning pentagram left in their place at the end if the video. However, they more or less dropped these theatrics after strange events started occurring, including (alleged) floating knives and forks at Nikki’s place. Eventually, it began to lose its edge, and they set their sights higher for mainstream success (e.g. ballads). In the hilarious clip below, Nikki Sixx and Vince Neil play “devil’s advocate” with the title. That it is “Shout at the Devil” not Shout “with“ the Devil, with Vince Neil giving his 2 cents on standing in the middle of the pentagram to protect yourself from evil. lol

1. The Rolling Stones – “Sympathy For The Devil“

“Please allow me to introduce myself I’m a man of wealth and taste”, sounds like the rhetoric of a certain “stable” politician, but these are the opening lines to The Rolling Stones’ “Sympathy For the Devil”. An iconic song from an iconic group, that is still played on rock radio often to this day. Here the devil is depicted as being in attendance, throughout different violent revolutionary periods periods in history. Well, more than “in attendance” but is pictured as an instigator and contributor to the violence (e.g. riding a tank). Here, the “devil” is war, it is “greed”, it is “political corruption and government coos”, but more than that it is lives in the hearts and actions of men. The “devil” is not horns, and pitchforks (like the one Brian Jones is holding above) but something more profound.

Although “Sympathy”‘s message is universal, the song, however, was not without controversy. Like Mötley Crüe, many people at the time thought that the Stones were really a Satanic group . This was due, also in part, to their previous album before this being called “Their Satanic Majesties Request“. For “Sympathy For The Devil” they added a samba beat because they knew it would scare white people (this was the 60s keep in mind).

What's playing on the wax cylinders this afternoon? 🕳
I was going to get beer for everyone though?!?
Tennis anyone? Happy Birthday to Geddy Lee of @rush. An Olympian on the bass, on tennis 🎾 who knows?
RIP Dusty Hill from @zztop . Very sad news, a great bass player.