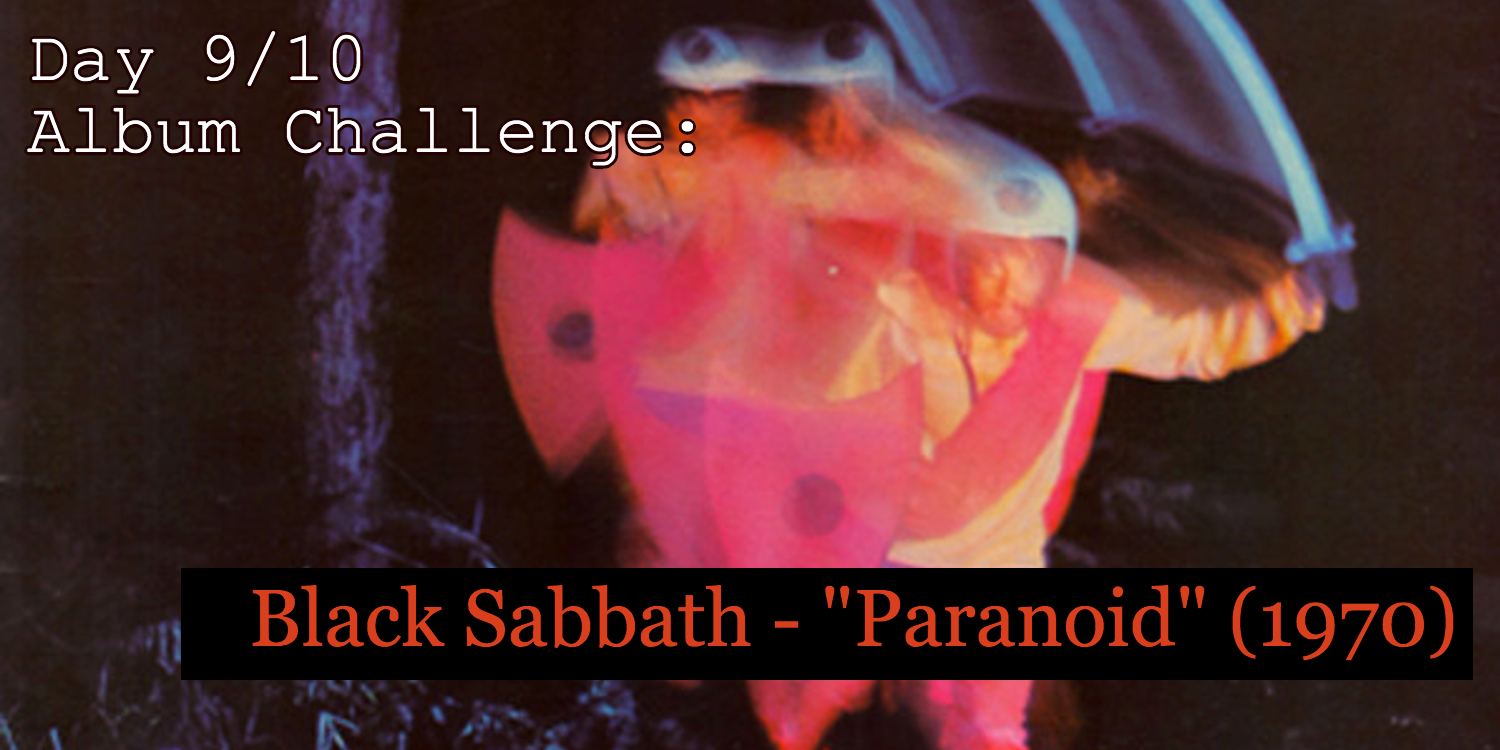 For our Day 9 pick in our 10-day album challenge, Black Sabbath’s sophomore album, Paranoid (1970). Paranoid altered rock and roll’s musical landscape and condemned it a life of eternal damnation. It also influenced us too.

I know, I know! Why pick the most obvious of the Black Sabbath albums? It’s true it lacks the doomy gloominess of the first album, their self-titled debut, “Black Sabbath” (1969), or the prog-iness of Sabbath Bloody Sabbath (1973). Indeed, if you were going to pick the Sabbath album with the “best” songs that aren’t as popular (for lack of radio play), it would probably be Masters of Reality (1971). However, Paranoid shouldn’t be overlooked just because it’s good and the most popular album, that would be weird. Awesome riffs abound, simplistic and hypnotic, that influenced a whole new generation of players, including myself.

Get “Paranoid” and listen to Sabbath on Cottage Country Vol. 10:

It was one of the first cassettes I ever owned and was my first indoctrination into world of Sabbath and Heavy Metal music in general. However, Paranoid crosses over seamlessly into the Classic Rock canon. Whether its the hard breaks of “War Pigs” (in Ozzy’s unwavering use of “masses” to rhyme with “masses”) or even the title track, “Paranoid“, which was willed into existence (conjured) during a 20 minute jam as a last minute addition, that eventually became the album-defining title and track.

The album also includes one of the more unusual but fascinating Sabbath offerings, “Planet Caravan“. It is Black Sabbath at their most psychedelic, dripping with echo but not without some blues-y elements as well in Tony Iommi’s guitar solo. Reminiscent of Stooges’ “We Will Fall” drone jam on Stooges’ debut release that year in 1969, as well. It is also the third track on the album. See, it was a prerequisite for legendary late 60’s albums to a have a cool “come down” song for the 3rd track.

Rounding off the album is “Fairies Wear Boots“, a playful but epicly heavy song with a winding instrumental, stellar drum fills and tempo changes and, of course, heavy blues riffs. Also, the hallucinatory inspired lyrics of Ozzy Osbourne that offer an insight into his imaginative and demented mind. The song begins with “…going home late last night” so we thought it would be a natural fit for Cottage Country Mix Vol. 4 (the first “party night” in our series).

Read our final pick in our 10-Day Album challenge. Albums that influenced The Cottage Country Mixes.

RIP Christine McVie. One of the greatest to do it and really the soul of @fleetwooddmac . She wrote and sang some of my favs from the band (“Little Lies”, “Everywhere”)
‘I just ordered 🍣 records from Japaaan!” And I couldn’t pass on these rock classics. The Damned “New Rose”, Zombies “Time Of The Season” and Procol Harum “Whiter Shade Of Pale” all have been featured on the Cottage Country Mix except “Cherry Bomb” (was holding on to for another cc mix).
Youse a HOser 🇨🇦. bumper sticker from a (now-defunct) antique market.
Stay protected and colour co-ordinated out there on the first day of summer! Even against U.F.phOtobombers.