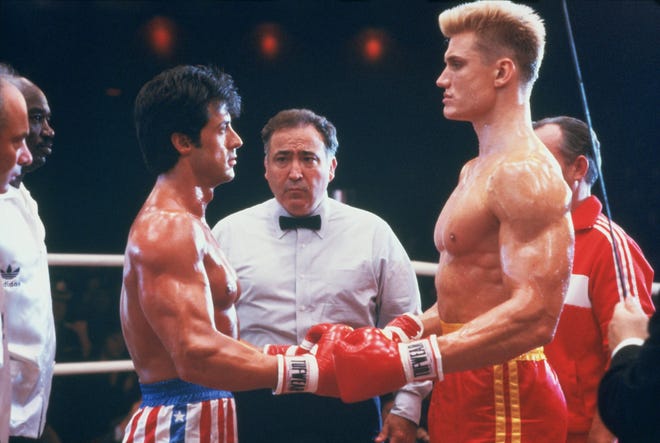 It is snowy day out here in Ontario and we are getting into the holiday season full swing (like a boxer), so why not look at a movie that not only has all these themes (winter, Christmas) but also add in a little cabin action and you get a movie perfect for Rockwood Cinema Review, Rocky IV (1985). Rocky IV was the highest grossing movie in the Rocky franchise, and for all its much touted Rocky cliches, Rocky IV itself was a bit of a departure from the Rocky franchise in its full embrace of pop culture. It’s peak 1980s Americana, smack dab in the year of 1985, it’s replete splendour can be simply expressed in the scene where James Brown plays for thousands of boxing fans, while Apollo Creed dances around in an Uncle Sam uniform. We the audience are not unlike Ivan Drago (played by Dolph Lundgren in his breakthrough performance) at the center of it all, dumbstruck. This is “Living In America” and we are going to drive across state lines until the wheels fall off in this, the other “over the top” movie starring Sylvester Stallone. Now, it is all these things and more but it is also (albeit briefly) a winter cottage movie, when (spoiler alert) Rocky trains for the final boxing match in Russia (except it wasn’t really Russia, more on that later).

Sylvester Stallone again plays Rocky Balboa but, now retired, he only gets time to box when he spars with his buddy, Apollo Creed (again played by Carl Weathers). Rocky is the quintessential man of action and not words, counterpart to Apollo who comes through with the bravado of Cassius Clay, who is a lot of words. Unfortunately the action not so much, as will see. Performatively, however, let’s be honest. If this is a review you have to admit that Carl Weathers really carries his weight in this one. “Outboxing” as it were in his weight class. Whether it’s sparring with Rocky, boasting at the press conference, where he calls Bridgette Neilson a “little lady”, or whether he is reacting to coach Paulie’s disturbing relationship with his Robot maid. Carl Weathers comes through with the gift of gab and the swagger. He knows that “it’s us against them” when it comes to those pesky Russians (a joke, comrade). However, it should be noted that the “beef” between Weathers and Lundgren onset was bigger than a Christmas roast and very real. In fact at one point it became physical, with Carl Weathers walking off set during their pivotal match and filming shut down for 4 days.

Furthermore, (MORE SPOILERS) Apollo Creed dying in Rocky is a little like Optimus Prime dying in the Transformers movie. A real shock at the time for such a loveable recurring character in a large franchise. A sacrificial lamb to the narrative as it were. Especially, because Apollo Creed’s flamboyance is what carries the first half of the film. He is an enigmatic character, whereas Rocky is all fists, words / emotions not so much. Except, of course when Rocky is training….

Now the part we have all been waiting for: the training scene. A montage of muscle and pain, with Rocky and Drago’s training footage juxtapositioned one another. The music is amazing too. I don’t think Stallone who directed the movie gets enough credit for this one. It is pretty iconic and something that would be repeated throughout cinema but may have been perfected here. Now this scene was filmed in the Russian state of… Wyoming. Yes, the little cabin in remote cabin in supposed Krasnogourbinsk is actually just Wyoming. In is unclear why Rocky goes to a remote cabin to train, although it should be noted that Stallone does the exact same thing with Bridgette Neilson in another movie the following year, Cobra (1986). In the case of Rocky, maybe it’s an attempt to climatize to Russia before the big fight where it takes place? Is it an attempt to get back to the fundamentals by shaking of modern training techniques, that Drago pursues? Or is it a chance to run up a mountain and holler in triumph? Maybe all of those. Anyways, this scene features all sorts of fun cottage outdoor pastimes, I would encourage you and your friends and family to do at your winter cottage (and tag us on ‘gram ok). These include: chopping wood, pulling a sleigh like a dog, lifting the carriage with people in it, outrunning the secret police in the snow, narrowly missing a plow and, of course, climbing a mountain to scream your enemies name.

Musically, besides James Brown there are some rock music moments. Including Survivor, who turns down the tempo of a bit “Eye Of The Tiger” and (bam!) you have “Burning Heart”. There is also John Cafferty’s “Hearts On Fire” who sounds like he trying to do his best Eddie Money. But listening to this, I am feeling inspired… might go pull a sleigh today.

/ 5
Length: 1h 31m
Rated: PG (Violence)
Best time to watch: I would say morning, afternoon or early evening. Because it’s comprised of boxing matches, so it has a prime time kind of feel.