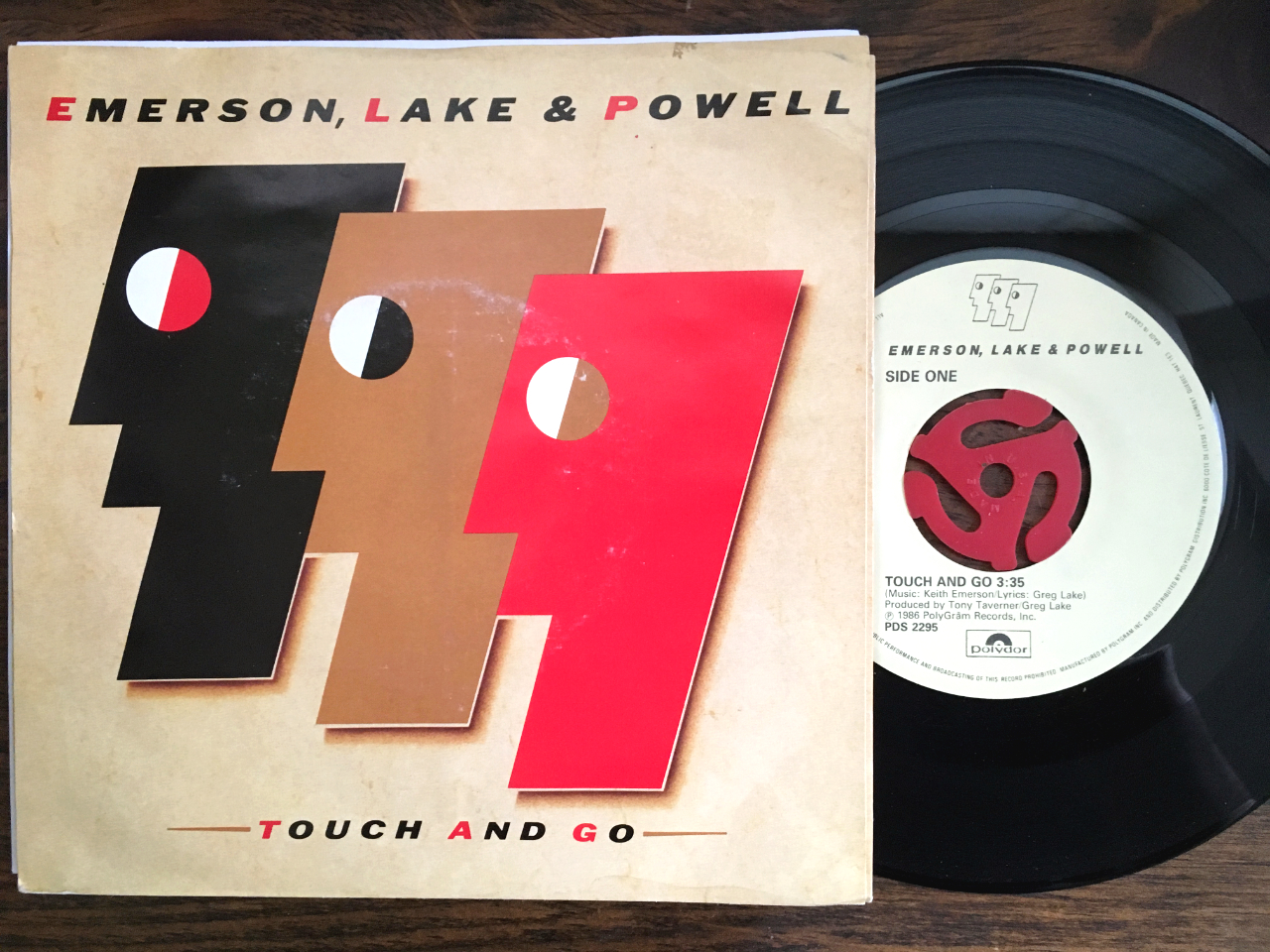 Today on cottagemixtape.com for 45 Fridays, we take a look at Emerson, Lake & Powell’s “Touch And Go” 45 single from their only album in this configuration, 1986’s self-titled, Emerson, Lake and Powell.

That’s right, the band that sounds more like a legal team or business firm, Emerson, Lake & Powell (that’s minus a Carl Palmer, plus a Cozy Powell) came out with a certified banger in 1986 with their song, “Touch And Go”. Now, admittedly I had never heard this song until it was featured in the comedy, MacGruber (2010), starring Will Forte and Kristen Wiig (a spoof on the classic MacGyver series). Hey, in 1986 I was five years old and I wasn’t listening to ELP.

However, once discovered it has been revered… nay regaled as the “kingly” song it is, particularly amongst the cottagemixtape.com camp. It was always a good bit of fun to throw this on while getting day-drunk. An anthem (if there ever was one) that is at once arresting, over-the-top, serious and hilarious. It’s like the party goes larp when this drops. It’s the true definition of getting jig-gy with it or getting medieval on your ass. So, naturally it was a perfect fit on Cottage Country Mix Vol. 17, where we were going for that “last wild party”-vibe.

Cottage Tip: “Touch And Go” is also highly recommended for blasting over the P.A. to wake up the whole camp. Once, while at this cottage we used to rent, my buddy fell asleep in the treehouse after a night of partying. Not only was this tree house dangerously approximate to the main cottage (they don’t let you make them like that anymore), it was also close to the outdoor speakers surrounding the house. So, at 1:00 in the afternoon we blasted this to wake him up (for breakfast of course). Better than a hot cup of coffee, those big brass keys ringing like the trumpet’s of Jericho coming to blow your house down (or treehouse).

…Sobering indeed, “Touch And Go”‘s message however is heartfelt and deals with the plight of crushing modern life (capitalism, servitude, poverty, materialism), so its words still resonate today. However, it’s bombastic style sounds more like entrance music for a wrestler. In fact, if this song has not been used for a wrestler’s entrance music, then clearly we are not a society that deserves “Touch & Go”.

Oh well, at least it made it to MacGruber, which recently got the “all systems go” for a TV-show this year. Will the TV show reboot be as triumphant as this song, we shall see but right now it’s… ahem “Touch And Go” (boh-bah-bah-ba!)

In the meantime you can listen to “Touch And Go” on Cottage Country Mix Vol. 17.