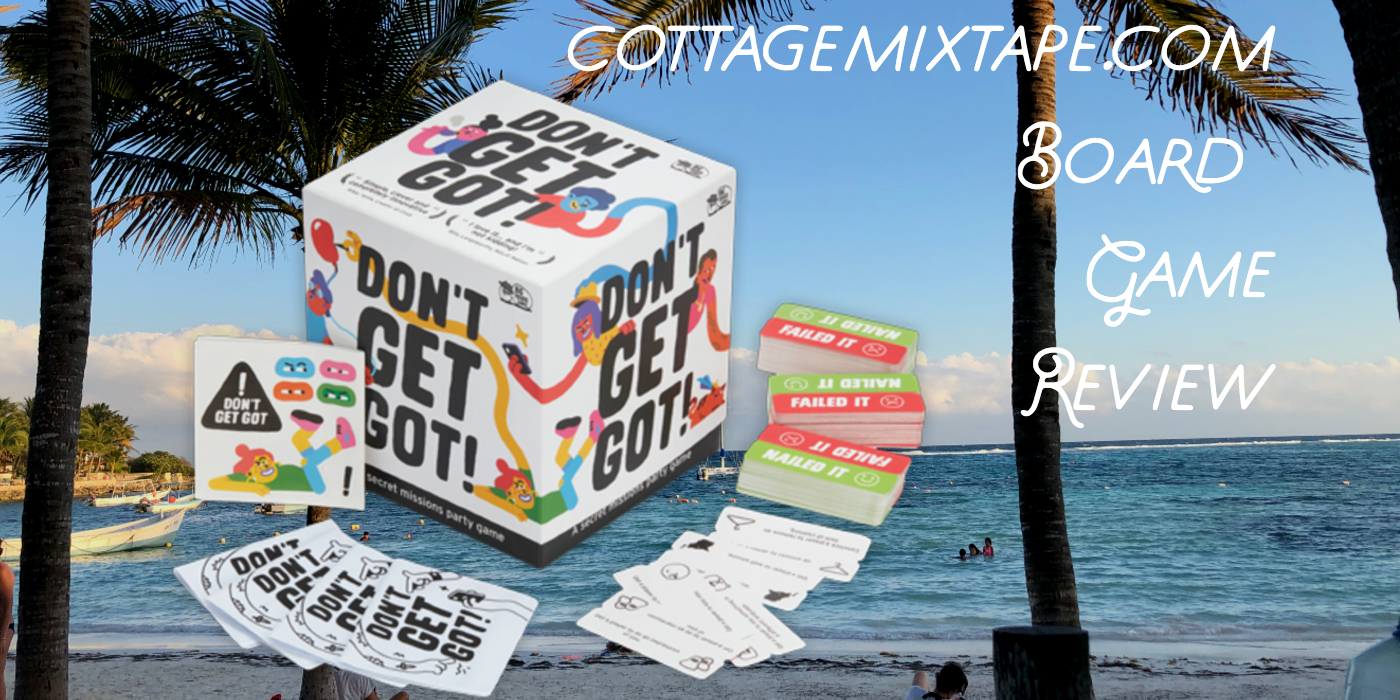 It has been a while since we did a board game review. So long, in fact, we forgot what board games are, evidently. Ok, this is not a board game but rather a party game by Big Potato Games (bigpotato.com) called Don’t Get Got! It is meant to stimulate conversation, get the group engaged and hopefully illicit some big laughs. Now, live from Mexico here is cottagemixtape.com‘s the review of Don’t Get Got!

This game was picked up by Toronto DJ & friend Lucie (lucietic.com) for a group trip to Mexico, which makes perfect sense because she likes to pull pranks, like trying to run me over with a golf cart while here in Mexico (don’t worry that is not part of the game). This is essentially one of those made-you-look-type games, where opponents are dealt small cards with tasks that they have to make others do. If they are successful in making one of the opponents do something (e.g. get them to repeat themselves or get them to mention something about the card holders’ appearance) then that player: Nailed It! If they are unsuccessful and get caught, they: Failed It!

Therefore, this is not your typical sit around the table type games. It is meant to be played in a social situation, like a party or (duh) a cottage. For us, we played it with a group of seven people while on vacation to Mexico. So, whether you were at the beach or eating breakfast, you were continuously on guard that your friend wasn’t trying to get you to do something and when you weren’t on guard: you got got!

Each player’s cards come with a convenient plastic pouch, that folds like a wallet. Carrying them around was pretty easy to refresh one’s memory for the tasks at hand. There were times when people didn’t read the task correctly, so they got someone to complete a task but they ‘failed it’ because it wasn’t the task written.

Don’t Get Got Review

In conclusion, Don’t Get Got! was an incredibly fun game. It did, at least initially have the opposite effect of engagement. People became kind of guarded, like ‘are you trying to trick me’ but half an hour later or a couple of drinks later people would eventually let their guard down and the game was on. Some, games were unexpectedly fast, some only lasting a couple of hours. After one player has ‘nailed’ three of their dealt cards out six, they have won and game is over. In a fit of getting got after happy hour, I showed my butt. That was not one of the cards mind you, that was just me mad that I got got. Cottagemixtape.com highly recommend’s Don’t Get Got!

Players: Its says 2 – 8 (only 8 pouches), but we would recommend minimum 3.
Duration: 30 minute game to 3 days (is what the box lists), which is pretty accurate. Most games were 2.5 hours amongst 7 people.
Ages: 14+
Learning Curve: Easy, anyone can play.